A couple of months ago, I posted on our facebook page my disappointment at the failure at proof test of a quite special pair of German finished Purdeys. Yes they are not technically Purdeys as they do not bear the name, however they are Beesley locks and Purdey actions that were finished by one of the Kaiser Wilhelms gunmakers in Munich. I also have it on good authority that they were purchased in the white from Purdey after they refused to add a set trigger to the number 1 gun. Or maybe they didn’t know how to make a set trigger, who knows.

During the proof, number 2 gun passed with no issue at all. However the number 1 gun of the pair failed quite dramatically as the pictures below show, cracked straight through and almost in half. That could have been down to the pressure the gun has had in its past from the rifle barrels or just being work hardened. No one will ever know. I must point out that I hold Birmingham Proof and the CIP standards in high regard as it is a gunmakers insurance policy. As the name suggests it proves the gun is safe and that is of paramount importance obviously.

At the time, many other gunsmiths, makers, followers of our Facebook page etc expressed their opinion that it was nothing more than scrap. We should give up and give our condolences to the client. Well, we like a challenge and proving people wrong so we persevered and can now report that number 1 gun passed standard steel proof and is now being restocked. Once we refresh the engraving and stocking is complete I will post a picture of the pair in quite a special case.

If you click on the images they will open in another window and you can zoom in to have a better look if you wish. 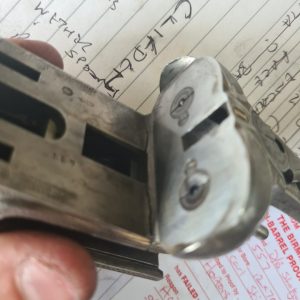 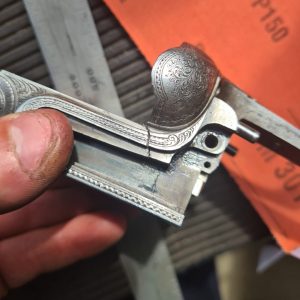 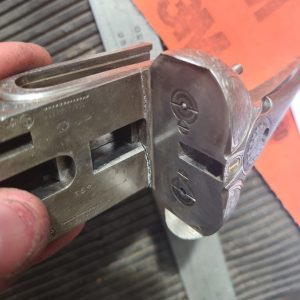 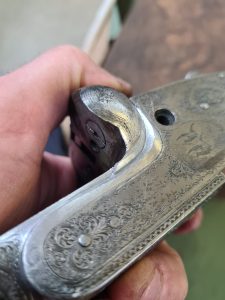 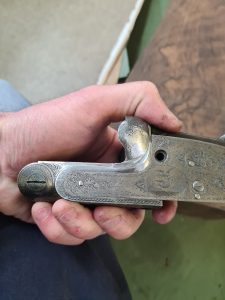 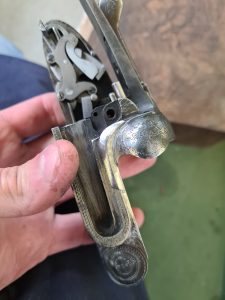 The Adventures of Giles Tommly-Horton, Volume 2, The Twisted Horn Gunsmith Apprentice required – Apply now! The Adventures of Giles Tommly-Horton, Volume 1, The Ransome The Horton Macnab decanter in aid of GWCT Martin Bublik engraved Beretta from Douglas Tate & ‘Piggy’ Johnson Design innovation vs mine is better than yours What is in a name? We have a solution to the lead ban Introducing the Limited edition Zoli 175th Anniversary Shotgun Buying Guide – Over and Under action types