Shotgun Buying Guide – Over and Under action types

Most of you will have read buying guides in the various shooting publications over the years. However for me, they don’t actually provide or improve your knowledge in terms of what to look for in a shotgun and why. Any Gunsmith will tell you that the measure of quality in a gun starts with the barrels. The next thing to look at is the action (sometimes referred to as the receiver), as this is meant to be a quick 3 minute read, I’ll focus on the action itself. By action I mean the bit that sits in between the stock and the barrels. How the action mates to a set of barrels is more important than how it goes bang for the purposes of this acticle.

Most customers will shop with their eyes and be drawn to the perceived quality of the wood, finish or the engraving. However the shotgun action determines the quality of design and the shooting characteristics of the gun. How many people actually understand the engineering and the physics of a shotgun action, probably not many. I previously wrote about the origins of the over and under shotgun , how wood is graded and also the various types of barrels used in shotgun manufacture which may also interest and teach you.

Shape of the action

This is where the physics come into play. There is a reason that the Boss & Co over and under is referred to as the grandfather not only the quality of the design which is so difficult to execute, but why so many makers such as Perazzi, Chapuis, Zoli, Perugini & Visini and Beretta try to emulate the shallow profile of the action. They all achieve it in different ways, but generally the rule is, that the shallower the action the less felt recoil as the recoil is pushed laterally back towards the shoulder, rather than vertically upwards. So, Browning, Merkel and the Italian Guild (Rizzini, Fausti, Lincoln and a plethora of others) actions are generally quite tall in profile and can suffer from increased upward recoil, the result of which is that you feel it more. Before I get lynched by a gaggle of Browning shooters adorned in badges head to foot, both Merkel and Browning remedy the high profile of these actions in different ways.

The Bite is how many times the barrels make contact with the action in a positive way that stop the barrels moving away from the face under firing. The height of the action is often (not always) determined by the position of the main locking bolt(s) (the thing that disengages the barrels when you push the top lever over). So Browning, Merkel and the Italian guild actions have the main locking bolt at the bottom of the action which engages a slot at the bottom of the barrel lump and it is that design which means the action has to be tall. Now calm down Browning loons, while the action is a tall lanky looking thing it makes up for it in the amount of contact the barrels have in relation to the action and regardless of what number or name Browning choose to pop on the side they all operate in a similar way. The pictures below show a typical Browning action and barrel lump for illustration which has 5 bites, bolt, hinge pin and 3 through lumps. 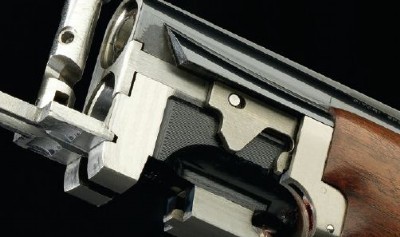 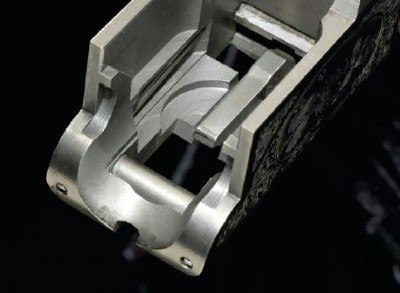 Merkel deal with the physics in a typically Germanic way, with the Kirsten bolt (a sideways sliding bolt/pin at the top of the action) in addition to a through lump to the underside of the action. This is a completely bomb proof way of securing the barrels to the action. In actual fact, while the Merkel action looks taller than a Browning’s, it is a gnat’s-breath shallower and is down to optical illusion due to the shape of the action/barrel lump. Again 5 bites, bolt, hinge pin, 1 through lump and 2 more with the Kirsten bolt. 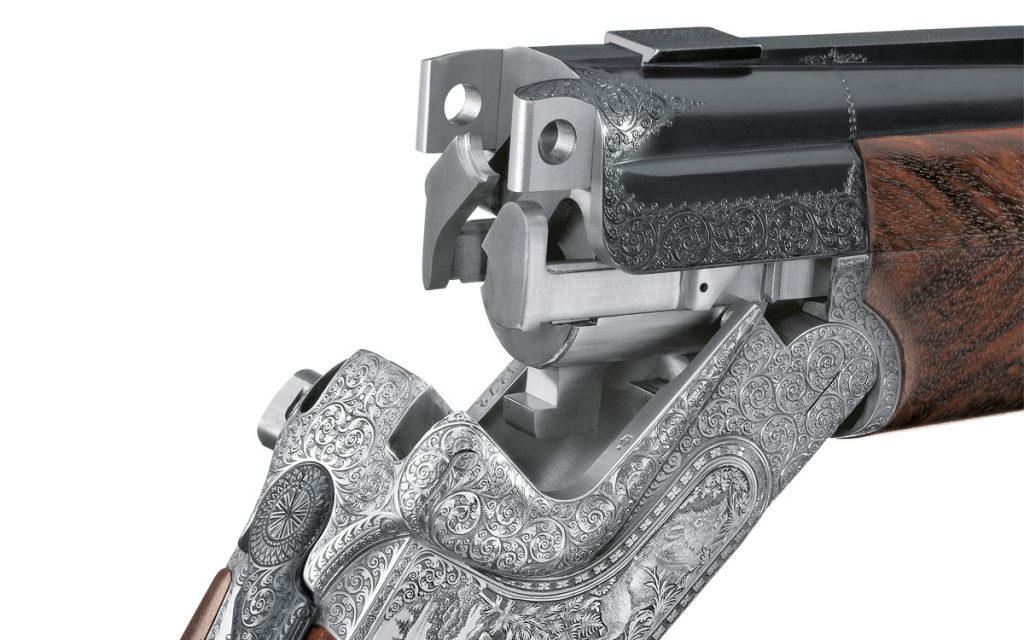 Zoli shotguns are a great balance of value and strength, with actions being incredibly similar to the Perazzi MXS. Not only do Zoli have a shallow action, but also 4 bites, bolt, hinge and 2 partial through lumps, but the wall thickness of the actions are greater than most comparable shotguns to add both strength and weight between the hands and the added bonus of improved balance. 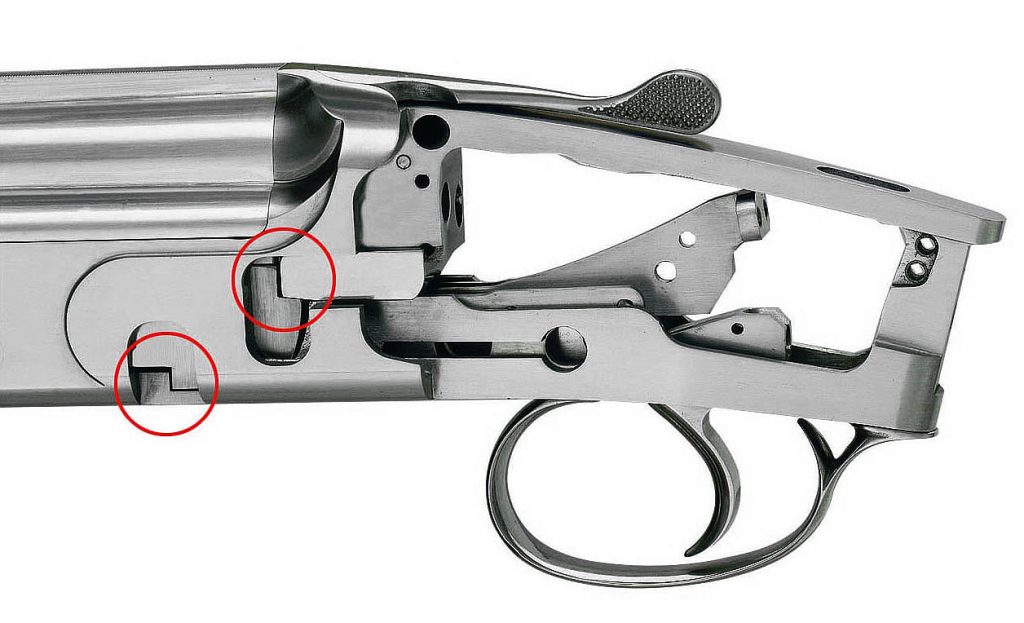 The real Boss & Co locking system has 6 bites, bolt, hinge, 2 partial through lumps and then 2 wedges so is not only shallow but also incredibly strong by design. 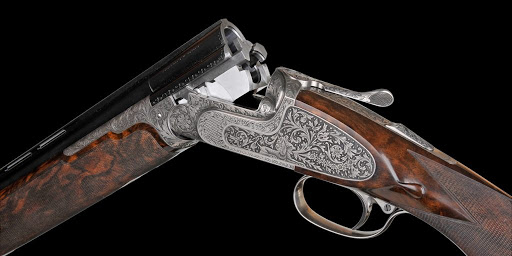 By now I would hope you have grasped that a combination of both shape and multiples of bites an action possesses in relation to barrel lump determines its characteristics as a good gun.

The last element has to be strength, which comes down the engineering capability and competence of the maker. It is basic common sense that the more metal you have to remove out of an action in the machining process, the less strength it will have. So for example, a Zoli action amongst other makers are made from one single piece of steel and at no point is the underside of the action machined out and replaced with a cover plate which you will find on all the Italian guild actions. So a Zoli action is stronger than an Italian guild action being that it is machined to reduce the cost of manufacture and it is easier to pass the head of a CNC milling machine across and through the action face once and then to pop a cover plate on afterwards. I won’t continue comparing one action to another, but I do hope you get the general idea for when you are looking to purchase your next shotgun. Try to avoid becoming attracted to the lipstick on the pig.

W Horton & Sons not only make our own fully custom shotguns and rifles, we also choose to retail fully or semi bespoke shotguns from Chapuis, Merkel, Zoli and Grulla . We do this as we believe in the manufacturing quality of the products we offer, much preferring to give our clients the best possible advice and benefit of our experience whether you choose to spend £3,500 or £35,000.

An Heirloom saved The Horton Macnab decanter in aid of GWCT Martin Bublik engraved Beretta from Douglas Tate & ‘Piggy’ Johnson Design innovation vs mine is better than yours What is in a name? We have a solution to the lead ban Introducing the Limited edition Zoli 175th Anniversary Response to hate mail regarding trophy hunting Service records for guns The Horton guns and the Whimsical girl